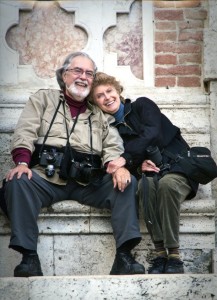 Frank Van Riper and Judith Goodman are husband and wife documentary and fine art
photographers, whose work has been published internationally. Goodman’s photography has hung in the Corcoran Gallery of Art in Washington, DC and the Baltimore Museum; she also is a widely exhibited sculptor. Van Riper’s photography is  in the permanent collections of the National Portrait Gallery, Washington, DC and  the Portland Gallery of Art, Portland, Maine, and has been selected for the Smithsonian American Art Museum in Washington. His 1998 book of photography and essays, Down East Maine/A World Apart, was nominated for a Pulitzer Prize and won the silver award for photography from the Art Director’s Club of Washington. They are the co-authors of Serenissima: Venice in Winter, a coffee table book of black and white photographs and essays that was published in the United States and in Italy. www.veniceinwinter.com

Frank Van Riper also is a widely read online photography columnist (www.TalkingPhotography.com) and for many years was the photography columnist of the Washington Post. Before that he served as White House correspondent, national political correspondent and Washington Bureau news editor for the New York Daily News. He was a 1979 Nieman Fellow at Harvard and holds the 1980 Merriman Smith Award (with the late Lars-Erik Nelson) from the White House Correspondents Association.

Van Riper is a popular teacher and lecturer, and is on the faculty of PhotoWorks at Glen Echo Park, Md. He has lectured widely, including at the Maine Photographic Workshops and the Smithsonian Resident Associate program. In 2007 he was awarded the Distinguished Achievement Award from the University of Maine at Machias for his “outstanding career in journalism and photography” and in 2011 was inducted into the City College of New York Communications Alumni Hall of Fame.

Goodman and Van Riper jointly teach photography workshops in the US and in Italy: The Lubec PhotoWorkshops at SummerKeys (Lubec, Me.) www.summerkeys.com and the Umbria Photo Workshops, Umbria, Italy (www.GVRphoto.com see workshops.)